The Arches National Park in Utah is a must see. I was not too long ago in the Moab area for geology-related field work and stopped for a few hours in the park.  This was not my first visit, but I enjoyed it as much as the first time. Below is a short account of how, from a geologic point of view, the arches formed.

It started with a “see-of-sand” in Jurassic, about 200 million years ago; at that time the Moab area looked not unlike the Sahara.  The desert-like environment persisted for fifty million years or so, and resulted in the accumulation of the two sandstone formations that make the natural beauty of the Arches today: the Navajo and the Entrada.  These formations overly a layer of salt, three hundred million years old. The salt has the interesting property of moving when loaded with sediment, just like tooth-paste moves when loaded and squeezed from the tube. Imagine a brittle layer of sandstone pushed up by a mobile layer of salt from beneath; the sandstone will break along faults just like this: 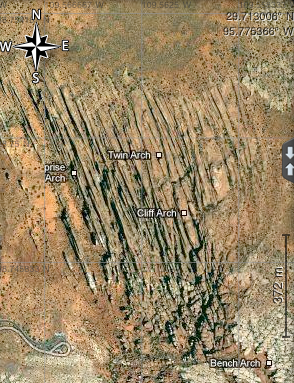 The faults are enhanced with time by erosion (water, wind etc.), which results in the sandstone fins – intriguing features when viewed from above.  Some of the sandstone fins are more resistant than others, and get preserved (at least for a while) as arches, spires, balanced rocks we see today in the park.