Poienari Fortress (in Romanian -Cetatea Poienari) is located on the upper reaches of the Arges Valley, in the Southern Carpathians of Romania.  It was built between 1456-1462 by Vlad Tepes, or Vlad the Impaler (photo below), the Prince who ruled what was at that time the southern part of Romania, the Pricipality of Valachia.  Yeah, the one that inspired the story of Dracula, but I am talking about the real person here, so let’s stick to the facts and history. 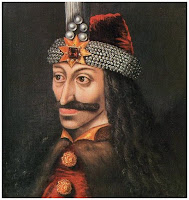 Legend has it that part of the construction was done by some of Vlad’s landlords who conspired against him.  The Impaler brought them at the construction site and pointing his sword he told them to build it or else….

I discovered the fortress during geology field work one summer, while working on my graduate degree in geology.  Geologically speaking the site is located very close to the boundary between the Paleogene strata of the Carpathian Foredeep and the crystalline basement of the Southern Carpathians.  This geologic boundary results in a very rough topography, which of course was the main reason why Vlad chose this location – another example of how geology and culture intertwine.

During the mid 1400s, Valachia was on the border between the Christian Europe and the Ottoman Empire, and Vlad had a big problem with the Turks, as in …. he did not want them in his country.  His court was in Targoviste, a locality in the hills of south-central Romania, but this place was too exposed, easy to get to and hard to defend.  Vlad needed remote places to take refuge when the Ottomans attacked.  The roughed peaks of the Southern Carpathians thrust and fold belt offered good protection, and a place to regroup and then attack back to defend the land. 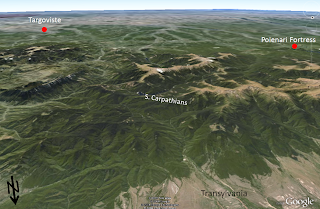 Today, the Poienari fortress can be reached by climbing ~1480 steps, which were built between 1969-1972 by the local Government, in an effort to make the place accessible to the public.