Geologic terms are often used in everyday life as metaphors.  Some examples are: volcanic temper, a stress drop (after a major event), glacial pace, rock solid, etc.  In this post I will search for the origin and first uses of landslide as a geoscience metaphor.  First some definitions.

The term landslide, as far as I can tell, was first defined by Charles Lyell in “Principles of Geology” in 1830.  Lyell used the term “landslip” and not “landslide” and defined it as

A portion of land that has slid down in consequence of disturbance by an earthquake or from being undermined by water washing away the lower beds that supported it. 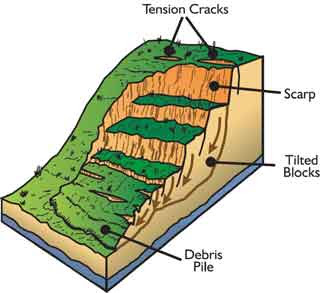 Principal components of a landslide are shown in this figure from the North Carolina Geological Survey .

The Wikipedia definition can be found here.  Here and here are examples of landslides from Romania, taken from the post on “Hazards and mud volcanoes in Romania”

The most common use of landslide as a metaphor is in politics; “won by a landslide” refers to capturing an overwhelming majority of votes by one party or candidate in an election.  First record I could find with this meaning is from a New York Times article from August 8, 1884 describing the Chicago’s Mayor Carter Harrison outlook on his chances for an upcoming election:

If it shall become reasonably clear in October that the Democratic Party will carry New York, New Jersey and Connecticut – and by October we shall know about where we stand – I shall look for the election of the Democratic Electoral ticket in Illinois by 10,000 majority – a perfect landslide in fact

Jacques Chirac’s victory in the French presidential election of 2002 by 82% is perhaps the best modern example of a landslide election.  In Romania’s historic election of 1990, Ion Iliescu, a former communist party official, won by a landslide and became the first post-communits president.

Politics also inspired two boardgames named “Landslide“, about the US presidential elections.  And of course there is also the music: Fleetwood Mac’s 1975 “Landslide” song remade in 1994 by the Smashing Pumpkins and later in 2002 by Dixie Chicks.